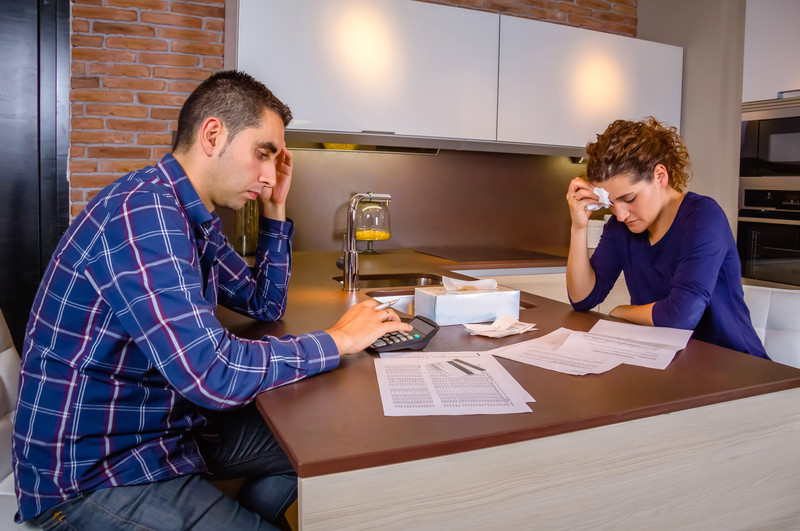 It is hard to think of planning for both bankruptcy and divorce, but by doing so you may put yourself in a better financial situation in the end.  If you are contemplating a divorce from your spouse and also laboring under financial debt and obligations that you cannot sustain, you might consider whether you should file for bankruptcy together before the divorce.

Declaring bankruptcy may carry some stigma, but gaining financial freedom through bankruptcy may be more beneficial than any stigma that might attach.  It will also simplify the divorce process by eliminating the debt and financial obligations that neither of you can carry alone (let alone together).

If you are struggling during your marriage to make ends meet, you will struggle more after a divorce because two cannot live more cheaply apart then they can living together. You lose the economic efficiencies of living together, and the weight that the debt you have will have a greater impact after divorce. Filing for bankruptcy prior to divorce can free you from that debt and give you a better chance of being able to make ends meet living independently.

What is bankruptcy?  Bankruptcy is a legal proceeding in federal court where an individual whose debts exceed assets or who cannot pay his or her bills can get a fresh financial start. The debts can be reorganized to make them easier to pay, or  (if you quality) the debts can be eliminated completely, leaving you free from the financial burdens of the debt altogether.

A Chapter 7 bankruptcy is faster, taking approximately three (3) months from the date the case is filed, primarily because debts are discharged (completely eliminated) at the end. Chapter 13 bankruptcy is used by individuals  that may not qualify for Chapter 7 bankruptcy due to income thresholds.  Chapter 13 bankruptcy may take as many as three (3) to five (5) years because the debts are not eliminated; they are simply reorganized to make payments more affordable over a longer period of time.

Whether it makes sense to file jointly for bankruptcy before filing for divorce may depend on whether both spouses qualify for a Chapter 7 bankruptcy and the kinds of debts that have been incurred. Some debts cannot be discharged so that is a factor to be discussed before moving forward with filing a bankruptcy case. The spouses’ ability to work together even though the marriage has broken down is also, obviously, important.

Keep in mind that the property acquired during the marriage will be divided between the spouses in divorce, along with the obligation for the marital debts.  If the parties have large credit card debt and other obligations, such as car loans, those obligations will be divided between them and not always in equal amounts. Both parties, however, may be obligated on the debts (to the creditors) under the original loan or purchase agreement even though the debt is allocated to one of the parties in the divorce.

Consider the hypothetical divorce of Mr. & Mrs. Smith where both are jointly liable for the debts occurred during the marriage. Let’s say Mrs. Smith agrees to allow Mr. Smith to keep the car that has an outstanding loan along with the loan itself and all of the couple’s credit card debt. Mr. Smith agrees to take the credit card debt because he gets to keep his cherished car. That is a good deal for both parties, right? Maybe not.

While courts can divide marital property between the spouses and allocate responsibility for the debts, courts cannot eliminate the pre-existing obligations of both spouses to the creditors to whom those debts are owed. In the hypothetical above, the divorce decree is binding only on Mr. and Mrs. Smith, as between the two of them; it is not binding on their creditors.  You may have heard the saying: “You can divorce your spouse, but you cannot divorce your debt.”

You can always take your former spouse back to court to try to enforce the divorce decree against him or her, but that will not stop the creditors from coming after you. For this reason, it would be beneficial to have the debts settled and discharged prior to the divorce.  The division of marital property in the divorce settlement is easier and cleaner to accomplish if the debt no longer exists

For these and other reasons, if the inability to make ends meet is a serious issue, it would be better to get the bankruptcy out of the way prior to filing for divorce. Eliminating the debt before the divorce proceeding will streamline the divorce process to the extent that the debt is no longer part of the martial estate. With the debt discharged in bankruptcy, there will be one less issue to  address in the divorce. Discharging all  debt permitted under law before the divorce also eliminates the likelihood of unfair allocations of property in exchange for debts when the spouse with the debt obligation fails to make payments, leaving the other spouse with less property than maybe he or she should have had, and the debt too!

Bankruptcy and divorce sometimes go together, but the timing of them is an important issue to consider. Considering them together may raise some complicated issues. Everyone’s circumstances are different.  Being aware of the potential issues will help you to be informed and to raise the right questions and concerns with your attorney.

Margret M. Leuthold, is an attorney licensed in Illinois.  She has worked as a consultant in the state and local tax area, with a focus on property taxes, for a large accounting firm in Chicago.  She has also practiced law for a small insurance defense law firm in Chicago.  Margret earned her BBA from the University of Michigan and JD from Chicago-Kent College of Law.

If you need legal help, contact the attorneys at Drendel & Jansons today.