Dealing with Debt and Divorce 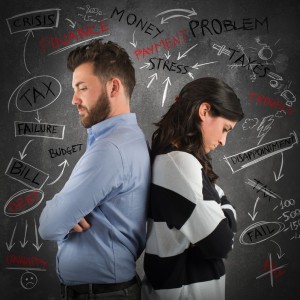 Debt is a primary reason for many, if not most, divorces. Though divorce often appears to be the way out of those problems, after a divorce, your debt problems won’t disappear automatically. In reality, just the opposite of what you are thinking may be true. Yes! Unfortunately, your problems are likely to increase.

There are lots of issues associated with the division of debts during and after divorce.

How debts are divided at divorce

In a community property state, your marital debts are considered as joint debts of which both of you are equally responsible, that is in a 50-50 ratio. For instance, if you and your spouse have $20,000 as a marital debt, then both of have to pay $10,000 each. Community property states include Arizona, California, Idaho, Louisiana, Nevada, New Mexico, Texas, Washington and Wisconsin. In Illinois, however, and all of the other states in the Union, your debts are divided “fairly”, not equally. It’s the court that decides who’ll receive what after a divorce, and, in some cases, one spouse may end up with most or all of the marital debt.

You must be wondering how debts are actually divided “fairly” in a separate community state. Right? Well, you must first realize that fairly does not mean equally. Marital debts are negotiable, if the parties reach an agreement; otherwise, the court will decide what is fair. For example, spouses may agree to divide the debt 50-50, or one of you may agree to pay off the whole marital debt in return of some extra assets. One partner may be ordered to pay all the debts and receive fewer assets if the other one is a stay-at-home husband or wife.

People forget, however, that we responsible for the debt that we have incurred, individually, regardless of what the divorce decree says. In reality, the canvas is filled with dark colors. Things don’t exactly fall into place as agreed (or ordered by the court). In many, if not most, cases, the situation ends up totally different from the way you’ve thought.

If you settle debts after divorce – Things you may face

Your financial problems don’t come to an end after the court splits the property and debts. Expenses are doubled (or at least increased) when two people go from living together to living apart (with two homes and two budgets, rather than one). After divorce, you remain responsible to the creditors for any debt you incurred, individually, as for joint accounts – that is, if your ex-spouse misses a payment on a debt, the creditors will chase you! (Even though the divorce decree says it was his responsibility!) You might be inclined to file for bankruptcy, but you will continue to be obligated to pay any alimony (maintenance) or child support because those obligations cannot be discharged in bankruptcy proceedings.

If you are finding it hard to meet the ends, but you want to avoid bankruptcy, then you might consider a debt settlement plan. It’s a viable substitute for bankruptcy if you can pay off, at least, a part of your debt, but can’t afford to repay the full outstanding balance under a debt management plan. In a debt settlement program, the creditor and the debtor agree on a reduced payoff amount.

How a debt settlement plan works

How can you avoid divorce debt complexity?

Debts make divorce more complicated. So, it’s advisable to consult an estate-planning attorney during marriage and consider how you can protect yourself in case of divorce, if divorce is a possibility on your horizon. It’s also important that both the spouses have equal knowledge of any financial information during the marriage and be involved in making major financial decisions.

A new beginning after divorce

According to financial experts, it is best if you can eliminate your shared debt before the divorce. It means you can use your marital assets to jointly pay off what you owe. If you want to put yourself in a position to make a fresh start, this is the best plan.

Handling debt during and after divorce is a tough job, and it can take a toll on your finances. So, if you are contemplating a divorce, or believe that divorce is a possibility in the future, put yourself in the best position you can by dealing with your debt now. Before making any decision about divorce, or before your spouse makes the decision for you, begin to tackle your debt now. Doing that may actually help save your marriage by eliminating the stress of debt; but, if it does not save your marriage, it will put you in the best position for a secure future.

Today’s post is contributed by Phil Bradford. Phil is a web enthusiast, who loves to share his expertise on money management and money saving ideas. He is associated with many finance and law communities.

Links to articles on the new Illinois divorce law:

For article on bankruptcy and debt, see the Drendel & Jansons Bankruptcy Blog.